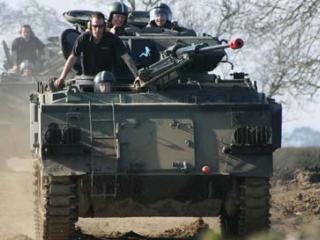 Birmingham From £116pp
Read more...
Let's do it!
Sorry... there doesn't seem to be any adventures for that search result!
Please try again.

Gather your troops and prepare for battle. In this adrenaline-pumping activity, paintballing and tank driving have joined forces to create the ultimate, unbeatable, mother of all warfare clashes! Yes, you'll engage in armed combat as you aim through the gun turret of a monstrous FV432 tank and try to blow the opponents out the water!

But first things first, all good soldiers need training, so our professional instructors will get you up to speed and ensure you're all ready for battle. Once kitted out in your military fatigues, you'll learn the rules of engagement and go through a vital safety drill before heading out onto the battlefield.

Begin by getting behind the controls of one of the fifteen fully armoured FV423s, fitted with beastly turrets, and learn how to command these real-life war monsters. You'll each discover how to master the art of aiming and loading the powerful 40mm paintball canons. When your instructor is satisfied that you're all proficient, it's time to engage in an epic paint-fuelled battle!

You and your troops will take it in turns to negotiate the tricky tank course, set in a WW2 bombing range, before engaging the enemy in battle. Make sure your well-drilled team work together as it takes a whole army to defeat the opposition and win the war!  You'll each be responsible for driving, loading, aiming and firing (and giving the targets a complete Dulux make-over!)

If getting behind the controls of a fully armoured FV432 doesn't make you feel invincible, we don't know what will! You'll need tactics, accuracy and a cool head as chaos ensues and it all blows off! Will you walk out a war hero? Or will you leave with pride as damaged as your paint-soaked uniform?